We were very lucky that our architect has a good working relationship with the local planning department. This meant that we were able to meet with the planning officer to discuss our plans when they were still at the “ideas” stage.

But that is not to say that it was all plain sailing ...

Having already converted two barns, we had a pretty good idea of what we wanted to do. As Llan Adan Barn was not listed (as the other two barns had been) we thought that getting planning for what we wanted would be easy.

Well we got there in the end, and the final version of our plans was by far the best of all the previous incarnations.

As part of our "green ambitions" we wanted to repair all existing masonry and re-point with a lime based mortar. The recent timber additions to be rebuilt - as they would have been originally - using existing stone from the site. The roof to be reclaimed Welsh slate.

All new materials to be sourced as locally as possible, and we managed to find a recently re-opened stone quarry less than 2 miles away. It is quite likely that the original stone for the barn came from the same quarry.

The foot-print of the original barn was quite small and the existing planning permission provided 3 bedrooms without the need for any extensions. The approved plans really didn't do the building much justice and didn't take into account that the barn was on three levels - with 3 or 4 steps between each level. In order to create even two good-size bedrooms it was obvious that we would need to add an extension. 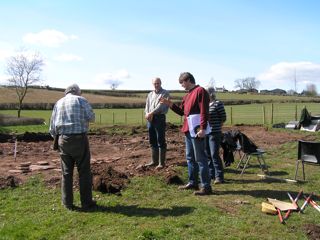 Our first meeting with the planning officer was very positive. It was clear that the existing out-building (referred to as The Annexe) was too small to be used as a garage, and it is better (from the planning department perspective) to know in advance what auxiliary buildings there will be (rather than have future uncontrolled sheds, garages, etc.) So verbal agreement was given for a new garage building and that the annexe could be used as a guest wing or studio office.

It was also agreed that to make a practical home an extension would be needed. The obvious place for the extension would be on the rear elevation, and this also provided an excellent view across the Rolls of Monmouth Golf Course to the Trellech hills beyond. We also had general agreement for a new entrance porch.

So far so good.

The outline plans were drawn up and another meeting arranged with the planning officer to go over the plans.

It was very obvious from the planning officers reaction that we had taken a bit of a liberty with the size of the extension and the size of the porch. So we agreed to reign in these areas, and try again. 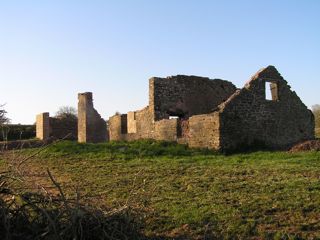 So after some more discussions with Paul Brice, our architect, we submitted version two, with a significantly smaller extension (sitting room) and porch.

The feed-back from the head of planning was that the whole scheme was an “over development” of what was originally a small barn. This seemed quite contrary to the original informal discussions with our planning officer and left us quite bewildered - and worried.

After a telephone call between Paul and the head of planning it transpired that he (the head planning officer) had not realised that the annexe was an existing outbuilding. So that addressed his major objection re: “over development”. But he was still not happy.

Our proposed porch was in the form of an large (ish) enclosed church porch. The planning manager's comment was that it is not typical for Monmouthshire to have barns with a cruciform footprint. He would be happy with the porch if it was in the form of a ‘cat-slide’ roof.

The only problem with this was that the section of the existing barn where the porch joined was single-storey. So the ‘cat-slide’ would effectively be an ugly flat roof. 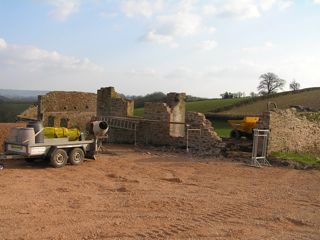 So with a flash of inspiration we came up with the idea of extending the two-storey section of roof to provide a full height inner entrance hallway with an extended ‘cat-slide’ roof over the porch.

This solved four problems at a stroke:

So in the third, and final version of the plans the new extensions equate to an increase of 25.4% of the original building (excluding existing outbuilding) well within planning guidelines.

The existing outbuilding will be used as a work studio and for occasional guests. The stonework will be repaired to match the main building and the single pitch roof to be replaced by a double-pitched (as originally) Welsh slate roof.

A new 4-bay open fronted garage will be built in the style of a traditional agricultural implement store. The two end sections will be enclosed to form a ‘pump room‘ for the water bore-hole equipment, workshop and storage for garden tools, machinery, bicycles, etc.

We are happy bunnies.