Six golfers from Ross-on-Wye Golf Club will be forever indebted to Brian Huggett (see below) for presenting us with VIP tickets to the final day’s play at the 2010 Ryder Cup. Not only that but we were in the Past Captains Club - this was real VIP hospitality !   The final day followed on to the Monday and we were there to witness the thrilling match to the final putt. 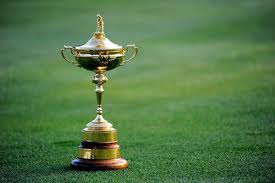 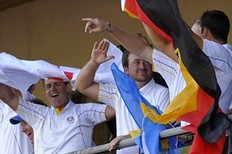 A day we will never forget 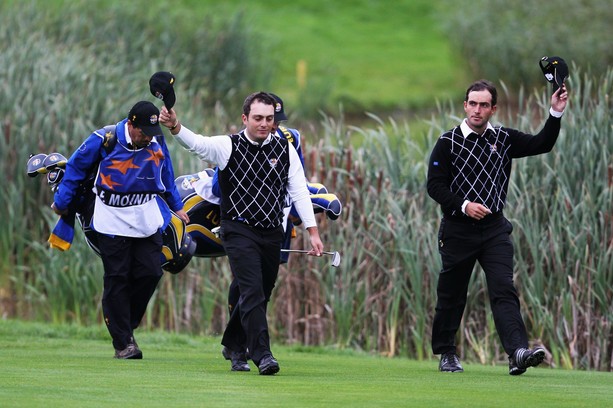 The course had been deluged with rain on the days leading up to the start of the tournament, and there was hardly any play on the Friday.

Although most of the matches from day one were completed on the Saturday, it was clear that an extra day would be required - the first time in Ryder Cup history.

On the Sunday there was a thick Autumn mist and play was delayed until about lunchtime. Spectators were not allowed onto the course until noon, so five of us found a Frankie and Benny cafe and had large Welsh breakfasts and plenty of coffee.

Once at the course there was a 2 mile walk to get to the hospitality “tent” over-looking the 18th fairway and green. (When I say tent - it was actually a luxury temporary 2-storey building). And of course lots of famous people, like Catherine Jenkins (singer), Robert Trent Jones (famous golf course designer), football managers, golfers, and other celebrities. 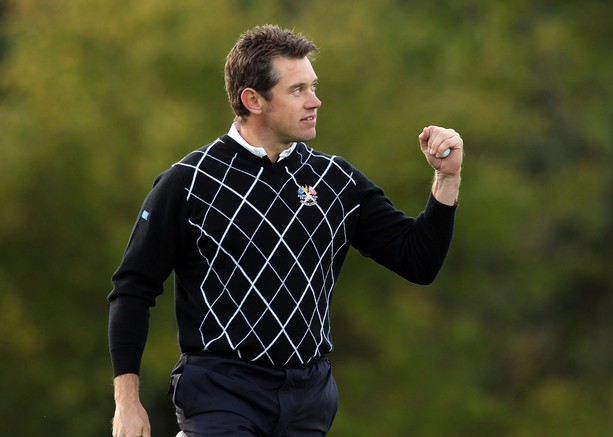 Inside, the Past Captains Club was like a hotel, with a central bar (free drinks all day) with a top quality buffet restaurant - and large screens showing the matches everywhere. Outside the large balcony had fantastic views of the 18th fairway and green.

Pete and I decided to go out on the course to watch some of the golf, but the mud on the spectator areas was literally knee deep in places, so we decided to watch the rest of the play from the comfort of the Past Captains Club.

The foursomes matches left over from Saturday were completed and leaving the match evenly balanced, but the four-ball matches saw Europe win 3 and halve 1 to give Europe a thee point lead going into the final day’s singles matches. What a day!

It wasn't until we hit the fresh air that some of us realised how much of the free hospitality we had enjoyed. I really wondered if I would be able to get up the next morning ... 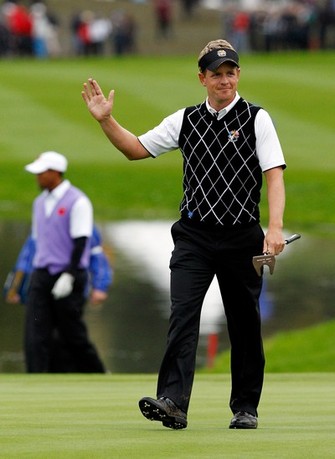 Amazingly we all met at Ross-on-Wye golf club car park at 7am as arranged. The wobbly legs and hangovers had almost disappeared. When we arrived at the course there was quite thick mist, but the sun was burning it away to reveal a truly spectacular Autumn day with blue skies and temperatures up in the twenties.

The first match of Lee Westwood vs Steve Stricker seemed to set the pattern for the early matches ... Westwood went 1up on the 5th hole, and it stayed that way until Stricker won the 12th, 13th and 15th to give the USA their first win of the day.

The next two matches featuring Rory McIlroy and Luke Donald went all the way to the 18th green, and I had the privilege of watching the final play from only yards from the last green. Amazingly there were very few spectators behind the green, and I had a perfect un-interrupted view of both these matches. Having been all square for the last 5 or 6 holes McIlroy almost threw it away against Stuart Cink, but managed to hole a longish putt to save the half. 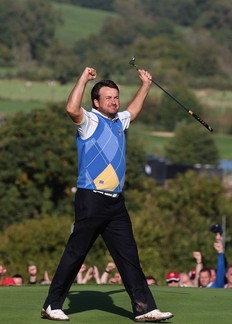 Luke Donald looked more comfortable against Furyk and ended up with a comfortable two putts for the match.

The USA then proceeded to win 5 and draw 1 of the next 8 matches, leaving the competition down to the final pairing of Graham McDowell vs Hunter Mahan. When McDowell went from 3 up to only 1 up with three holes left the match looked very far from certain.

On the 16th McDowell sent his chip 20 feet passed the hole, and things weren't looking brilliant. When McDowell holed the massive putt to win the holed you could hear the cheer across the whole course.

Another great eight foot putt on the 17th saw the match won 3&1 and the the Ryder Cup won by Europe. It was fantastic to be there. 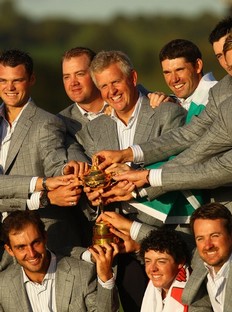 Our VIP Past Captains Club badge also entitled us to a gold pass to the closing ceremony. So Pete Neilens and I crossed the muddy spectator tracks to join Godfrey Farr in seats very close to the front and just behind the European team caddies.

The atmosphere was incredible, the sun was shining, the champagne was flowing and there were tears in the eyes of hardened golfers everywhere. The speech by Cory Pavin was dignified and subdued, and Colin Montgomery was overflowing with pride and joy.

And just when you thought it couldn’t get any better - as the European team walked from the arena, Pete, Godfrey and I were given “high 5s” by the whole of the European Team.

A day we will never forget.

It is difficult to describe the fantastic atmosphere and good natured revelry. The crowds were respectful to the Americans but so proud and joyous about the fantastic performance of the European team.

Brian was a leading member of the bidding team to bring the Ryder Cup to Celtic Manor and was appointed Ryder Cup Ambassador by the European Ryder Cup Board.

Brian played in 6 Ryder Cups - the first of these was in 1963. He was unbeaten in 1973 when he and Maurice Bembridge beat the legendary pairing of Jack Nicklaus and Arnold Palmer 3&1.

Perhaps Brian’s greatest Ryder Cup moment was when he holed a courageous 4½ foot putt on the final green to earn GB&I a 16-16 tied match.
(That was the year when Jack Nicklaus sportingly conceded a very missable putt to Tony Jacklin on the final hole).

Brian was Ryder Cup captain leading the GB&I team at Lytham St Annes in 1977. After that Brian took a key role in reforming the Ryder Cup to become Europe vs USA - transforming the previously one-sided event into what the Ryder Cup is today. 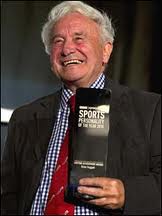 In December 2010, Brian Huggett was awarded the Welsh Sports Personality of the Year Lifetime Achievement award.